Tuesday at the International AIDS Conference has been dedicated, for me,  once again to increase the voice and visibility of women and girls living with HIV.

But before I go into what I have done let me tell you that one of the great news that was announced this week is the results of a large trial on microbicides using Tenofivir (an ARV).

A  Microbicide is  a woman controlled prevention method. It can be a gel or a cream, or even a ring, that when applied to the vagina stops HIV transmission, and sometimes can also prevent other STDs. If you have never heard about them, it  is because we still don’t have an effective one. This is why this research is so important.  At this point in the trial effectiveness reported was around 39%, however it is probably higher, because adherence wasn’t very high in the long-term, but this is a behavioural problem that hopefully can be addressed.

Personally it was a fantastic day, but a bit nerve-wracking. In the afternoon I co  facilitated a workshop, with the help of Angelina, Sophie and Harriett,  entitled ‘Women Living with HIV Getting Involved with the Media. Why Bother?”

The workshop was held in the Women Networking Zone, an amazing space in the Global Village dedicated to foster debate and action about important issues for women and girls. The area is delineated by a washing line where bras and nickers are hanging. For me this washing line highlights  the intimate and personal aspect of women’s discussion and political involvement.

Here are some images:

The workshop focused on understanding what we can gain by becoming more visible in the media and in building skills for women to feel confident at giving interviews. As an end result  we wanted also to have  some interviews by women who participated in the Vienna conference to be published in a twin edition of Positively Women Magazine (in English) and DHIVA magazine (in German). At the end of the workshop 6 women volunteered to be interviewed. How is that for increasing the voice and visibility of HIV positive women?

The Women Networking Zone also hosted the launch of WeCare + , a newly established European and Central Asian network of women living with HIV.

At night I had the most nerve wracking and exhilarating time of my life. I was scheduled to lead the Human Rights Rally alongside Julio Montanier, the president of the International AIDS Society, Michel SIdibe Director of UNAIDS and Rolake  Odetoyinbo, an amazing woman living with HIV from Nigeria. There were many more amazing activists and politicians leading the march, but unfortunately I do not remember everybody’s name.

We marched through the historical center of Vienna. We were a crowd of thousands and thousands of people. Black, white, gay, sex workers, trans-gender, male, female and anything in between. We arrived in the beautiful Heldenplatz, at sunset,  and we were shoved on stage to make our speeches before the singer and activist Annie Lennox performed.

Here is my speech:

I am Silvia, I am a woman living with HIV.

Here in Europe we are lucky enough to have access to treatment. But, we all know too well that it takes more then a handful of pills to live with HIV.

Yes the virus in our blood can now be undetectable, but stigma is almost everywhere.

Many of us live lives of fear and shame. Women like me even fear to start a relationship or feel shame about what people think of us if we have babies. We still fear to be rejected by our families and loved ones.

And it is not only fear. It is also reality. Many of us still experience discrimination even when going to see a family doctor or a dentist.

Those of us who are in prison can be bullied, and attacked, without protection from those who are responsible for them.

I could go on and on with the violence and lack of support which is still the daily reality for many of us.

Today I would like to ask you, you who are HIV positive like me: what is the answer to this? What part can we play?

Personally I made the choice in 2005 to be open about my status. It is one of the most powerful tools I have to challenge stigma and to stand up to any discrimination.

It is our birthright to be treated with dignity and respect, but it is our responsibility to demand that others fulfill this right.

Stigma will not end if we are invisible.

Women and girls what do we want? 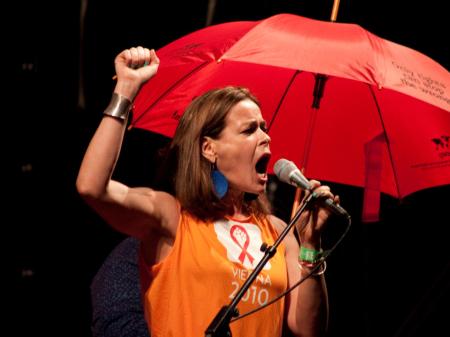 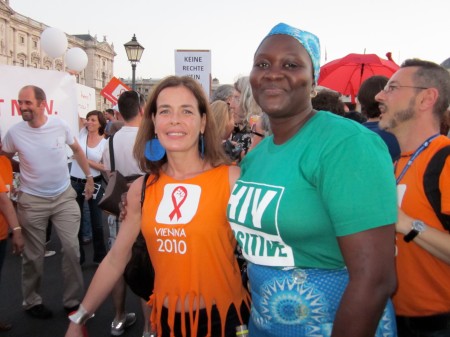